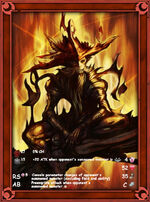 This is an excellent card. His reverse skill should read "If the opponent's summoned monster is Sphinx, you win the game" or really any other deck that relies on a grimoire buff. To top it all off, he's an above average combatant with decent agility and damage and really worth the 4 cost. The only issue is that Fire has a lot of really good options in the 4 mana slot and if you aren't playing against a Grimoire deck, they might serve you better.

Retrieved from "https://elementalmonster.fandom.com/wiki/Redcap?oldid=6084"
Community content is available under CC-BY-SA unless otherwise noted.