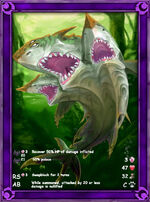 Infernal Fang - Damage 21, Has a 60% chance of poisoning the opponent's summoned monster

While summoned, when attacked by an attack of 20 ATK or less, that damage is nullified.

A much better defensive card than killer shark, the Chaos Shark has a higher damage negation ability, an attack that recovers HP and the ability to poison the opponent's monster with a free attack that also deals decent damage. Slightly low agility and average hp are the only drawbacks on this card.

Community content is available under CC-BY-SA unless otherwise noted.
Advertisement